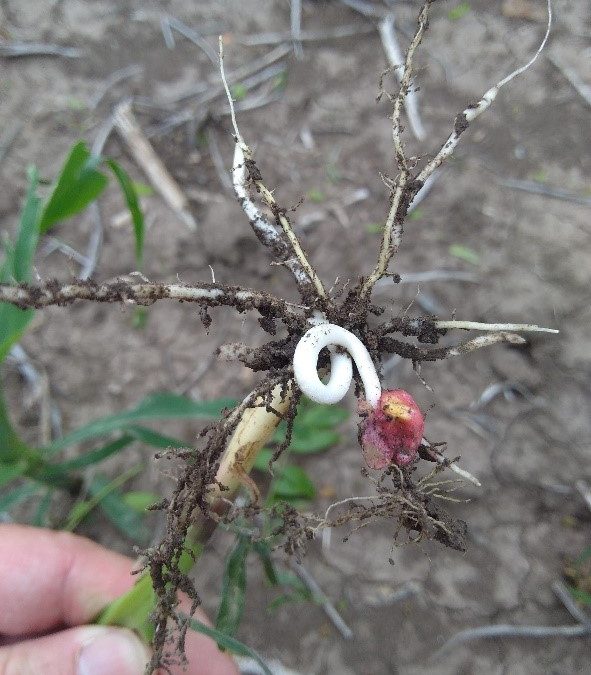 A number of corn and soybean acres were planted in NuTech’s central and southern footprint before this current 4-5-day cold snap.  Soil temperatures along I-80 in central Iowa dropped from 54°F on April 7th to 43°F a week later and will likely drop a couple more degrees in the next couple days.  This presents various risks to those early planted acres and we should pay close attention to these fields as temperatures warm up and emergence begins.

In corn, the seed imbibes approximately 30% of its weight in water within 48 hours of planting no matter the temperature of the soil water.  At approximately 50°F and above, growth of the radical (root) and coleoptile (shoot) begin.  Very little or no growth occurs at temperatures lower than 50°F; this delayed growth increases the risk of disease pathogens.

This all can translate into uneven emergence, reduced vigor and stands and lower yield potential.   When scouting these fields, look for soft, mushy kernels, radicals and coleoptiles with cracks and/or discoloration and soft rotting tissue.

Soybeans can be affected by imbibitional chilling as well, but the time frame is about 12- 24 hours.  Untreated soybeans are at a greater risk of early pathogen pressure.  Bean leaf beetles are attracted to the first emerging soybean fields, so keep an eye out for them.

Early planted fields are also at risk of frost after emergence.  Corn’s growing point is below the soil surface until approximately V5, but soybeans are vulnerable as the cotyledons emerge.

The links below address some of the potential issues early planted fields followed by cold weather may face: